Several years ago we began exploring how we might make functionality that was readily available on Windows™ platforms available to NonStop applications.  We looked at porting some of them to the NonStop.  We have been able to do that to a very small number of tools, like an HTTP server and email client.)  Most of the other tools were either proprietary or need features that were not possible on NonStop. 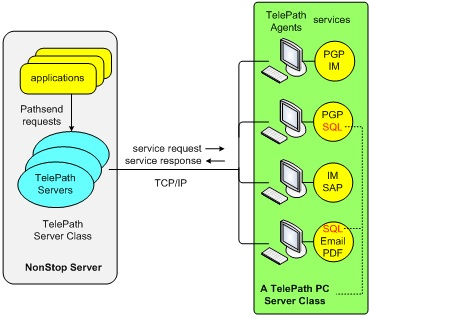 This was the history of how TelePath came to be.  We wanted to have a NonStop program, running as a serverclass, that would allow applications to simply do a Serverclass_Send or WRITEREAD sending instructions on what is to be done and, optionally include files to be processed.  The reply could also point to files that returned.

Utilizing experience we had with Server Object Gateway (SOG) we built two primary components.  The first was a serverclass, TREMSVR,  that would receive the requests and send them, via TCP/IP to a Windows server.  The second, TeleRemotePC, was a Windows application that would process the request and perform whatever operation was wanted.  We also wanted to provide at least some of the Tandem/NonStop fundamentals.  Not only can there be multiple instances TREMSVR, but each TREMSVR process can communicate with multiple TeleRemotePC programs. 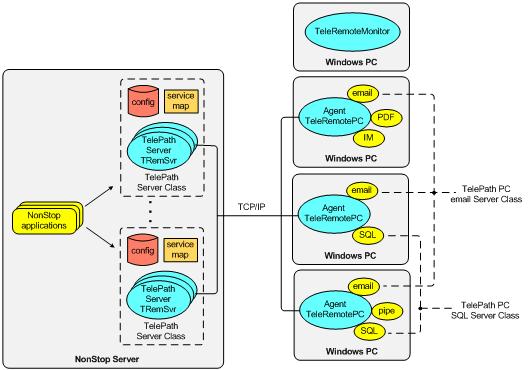 TelePath has been robustly providing a wide variety of Windows functionality for many years with a growing number of customers. Look for an upcoming Whitepaper which will provide more technical details of TelePath or request More Info about this product.

Do you find this tutorial blog helpful? Let us know what you think, and how we can make it even better. Don’t forget, you can subscribe to our blogs (top right-hand corner of the home page) to get automatic email notification when a new blog is available.

Donald Wickham has 31 years experience with Nonstop
including 20 years for Tandem, Compaq and HP. He has been with TIC Software for 11 years in the role of Chief Architect.