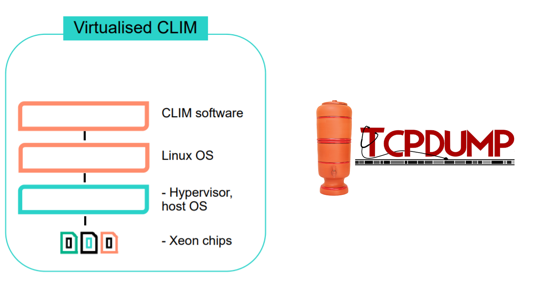 Warning: Doing TCP/IP traces on your network CLIM could cause it to fail!

Now the good news: You can avoid it.

Sometimes you need to capture the TCP/IP traffic that is passing through a CLIM interface to diagnose session problems and the like. This is relatively easy using the Debian Linux command tcpdump, which you send to the CLIM using the CLIMCMD macro. But there are many options in this command, and a few of them can be problematic if you’re not careful. The behavior of tcpdump is also not intuitive to long-time users of NonStop. It’s documented in the HPE NonStop Cluster I/O Protocols (CIP) Configuration and Management Manual.

First, once you initiate the trace, how do you get it to stop tracing? That’s done by pressing the <break> key on your terminal or your emulator. But sometimes the trace keeps on running even after you think you’ve stopped it. The culprit is the “-prov” switch in the command line, which you mut use if your system has the MULTIPROV option turned on. If you use “-prov” the trace will not stop upon seeing <break>. You need to specify “-provider” in order to get the desired behavior, and that is an undocumented feature.

Second, you usually want the trace to be captured to a disk file, which you do with the “-w” switch. Once captured, you can transfer it to your NonStop system, and then to your PC where you can use wireshark to read it. But you must make a directory to hold your trace file before you can do it. The default filesystem for CLIMCMD commands is the root, or “/” directory. This is a bad place to put your trace files since it is also where the CLIM operating system puts all of its files, including virtual memory. If it fills up it will cause the OS to stop working. So, you should create your trace directory in the /home filesystem which is on a different physical disk inside the CLIM.

Third, you may want to limit the size of the disk file(s) created, and even use them as circular buffers. That depends on what you’re trying to catch but it can be done with the “-C” switch, which specifies the file size in millions of bytes.

Last, you want to make sure you clean up once you’ve finished tracing. This consists of deleting your trace files once you no longer need them, and making sure any tcpdump processes are gone.

That’s it! You’re done, and your CLIM is still happily running.

Matt has over 35 years of Tandem/HPE NonStop experience with a particular focus in analyzing and optimizing system architecture and performance. He is now part of TIC team and working with customers in an operations support role, analyzing system performance to ascertain where improvements may be made.

Matt’s career spans the corporate transitions of what is now HPE NonStop. He started at Tandem in 1982 as a system engineer, and saw the company evolve from Tandem to Compaq, and finally to HP/HPE – from where he retired with the title of Master System Architect. Throughout the course of these changes, Matt’s job was focused on pre-and post-sales technical support for software and systems.